By Jason Depew, of Aviation Bull and TPN staff writer

I’m not generally a fan of cases for smartphones or tablet computers. The device manufacturers go to great lengths to make their designs slim, light, and elegant. Reviewers endlessly compare those statistics like they really matter. Then, most of us jam these gorgeous triumphs of glass, metal, and electronics into bulky cases made of cheap plastic. They become blocky, heavy, and ugly. Many offer such robust protection that they also “protect” heat from leaving the device. With the wrong case, a tablet in a sunny airplane window probably feels like a wrestler trying to cut weight by running outside…in Phoenix…in a rubber suit. Nothing good can come from that. I’ve had iPads in bad poorly-designed cases overheat on me in flight.

I rebel against all of this with my Nexus 5X, tempting fate every day by carrying it around with no protection other than a thin screen cover. That said, case manufacturer Pivot may have just won me over.

My company just upgraded our Electronic Flight Bags (EFBs) to new the iPad Pro 10.5. (Yes, they’re superb. With Jeppesen and TPN Sponsor ForeFlight’s recently announced strategic partnership, this EFB is only going to get better over time.) They have also come out with a new Pivot case that attaches to mounts on our side windows. We had Pivot cases for our previous EFBs. They worked well, but when you’re forced to support the-device-who-must-not-be-named, you can only do so much. It turns out that the iPad Pro + Pivot case combo is outstanding.

(Before we go any further, let’s address the fact that Pivot is a TPN sponsor. They support our network because they care about us pilots and want us to have good resources. As a group, TPN will not suffer if I say nice things about Pivot. That said, they didn’t ask me to review their product and I don’t get any personal benefit for writing this. My Pivot case was purchased by my airline. If you’re skeptical about my opinion of Pivot’s products, consider the fact that my airline bought more than 14,000 of their cases for our last EFB and stuck with them for another 14,000+ cases, this year alone, for our switch to the iPad. Talk about a vote of confidence!)

So, why is this new Pivot case enough to make a believer out of me? I’m a function over form guy, so utility is the first thing I notice. One of Pivot’s taglines is “Stop briefing the window.” They believe that a departure/arrival briefing on a flight deck should include the briefer holding the computer in a position that allows the entire crew to look at the pubs, and use eye contact and body language to help convey and verify receipt of your message. This also allows both pilots to keep an eye on the aircraft during the briefing. 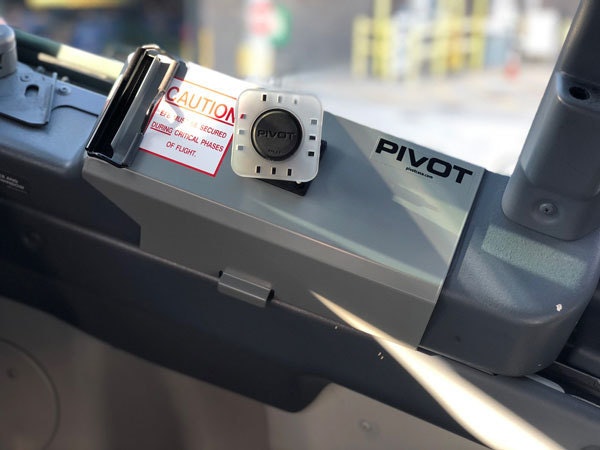 A bulky or heavy case, or one that is difficult to remove from a window mount, frequently precludes this good CRM practice for many pilots. You end up with two pilots, staring in opposite directions at their own tablets, while one talks and nobody flies.

Pivot’s iPad case is thin and lightweight. After dealing with the monstrosity of my old EFB for two years, I got a good laugh the first time I did a departure briefing with my new setup. When I hefted it toward the middle of the flight deck to start my briefing, I did so with the amount of force needed for my old EFB…and nearly threw my device onto the captain’s side console. It’s so light that it’s easy to move around and can be held comfortably where the other pilot can see it for an entire briefing.

Bulky mount/case setups can also impact immediate safety of flight. I’ve flown with and seen setups on military aircraft where the EFB actually interferes with movement of flight controls. In America’s over the top risk-averse Air Force, I’m shocked that any military commander would allow that to continue. With thinner, less-bulky cases and almost unlimited options for mounts, Pivot has the potential to solve this problem for any aircraft, allowing full use without flight control interference.

My airline went with one type of mount for most aircraft, and a Long Term Removable Mount (LTRM) for others  (our 737s, CS100s, and maybe some more.) All versions of the mount have an unobtrusive mounting arm with numerous, easy to use adjustments. A square-shaped piece of plastic on the end slides effortlessly into a channel on the back of the case, seating with a satisfying “click.” That joint rotates easily, allowing you to switch from landscape orientation for STARs and taxi charts, to portrait orientation for approach plates in the same way you might adjust your car’s rearview mirror. When you want to pull it off the mount, you place your hand on the top of your computer and your fingers naturally find themselves on a release button. Just lift up and the device slides right off. The new Pivot case + iPad combination is so light that this is a one-handed operation. 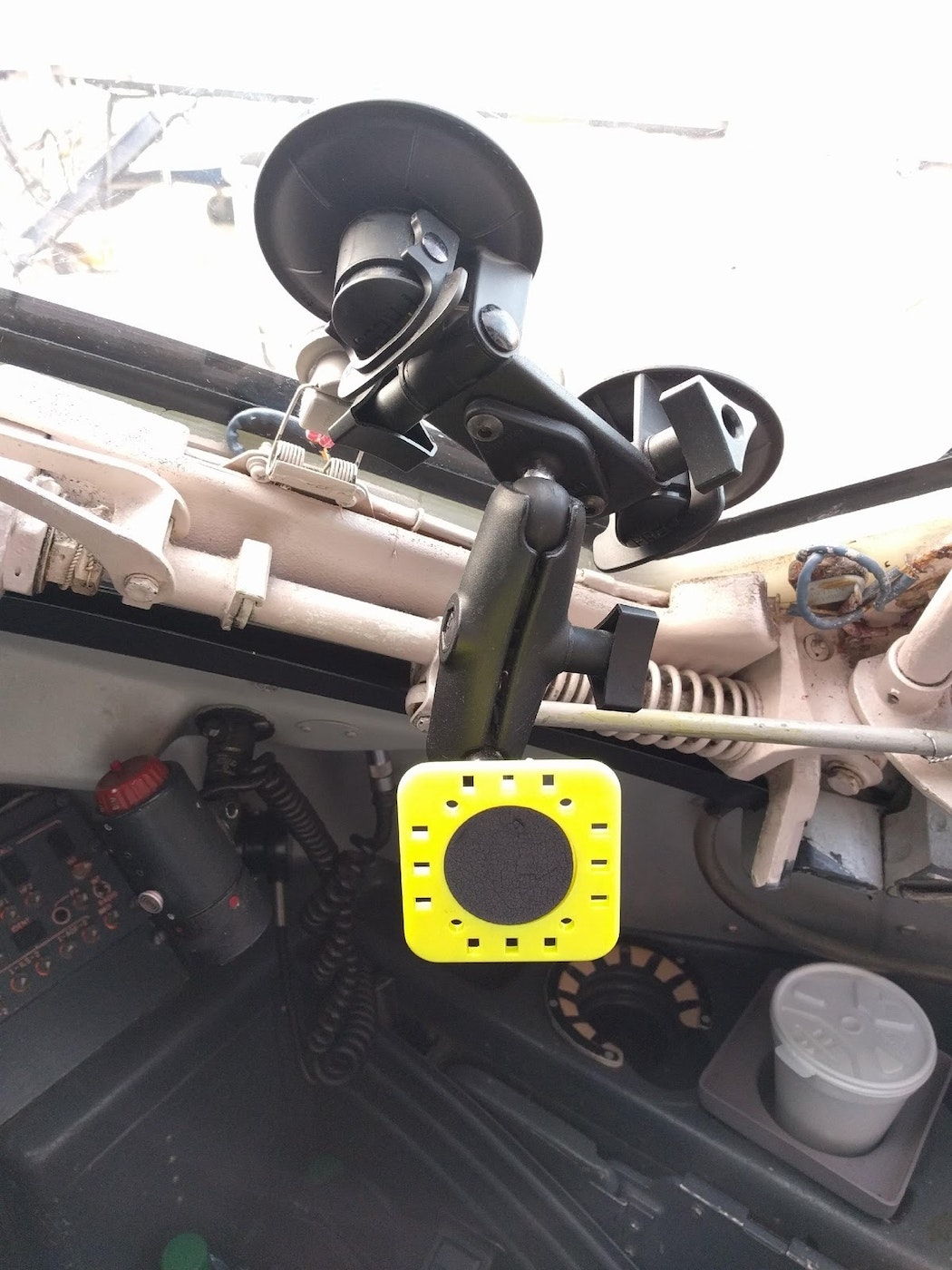 This new case comes with a protective cover, or “Folio Cover,” that protects the tablet’s screen when you jam it into your flight bag next to your lunch and your headset at o-dark-thirty. The cover has notches for the edge of the main case, allowing you to prop the computer up on a desk at a variety of angles. (Binge Lost in Space again on my layover? Why yes, thank you. I think I will.) Many other case designs make screen covers like this a frustrating distraction when you try to mount it on the window. There is a drawn-out process to fold the flap away, making the case thicker and heavier than it needs to be, or you have to go through a complicated process to remove it altogether. The flap on Pivot’s case is removable, but their design is ingenious. It attaches with a small plastic square exactly the same shape as the one on the window mounting arm. The square slides into the same channel on the back of the case and is removed with the same quick release button. Our contract requires our company to provide us with a keyboard for our EFB. This hasn’t happened yet, but when it does, Pivot’s design makes it easy to use the keyboard with Pivot’s case to replace the standard folio cover as a screen protector. 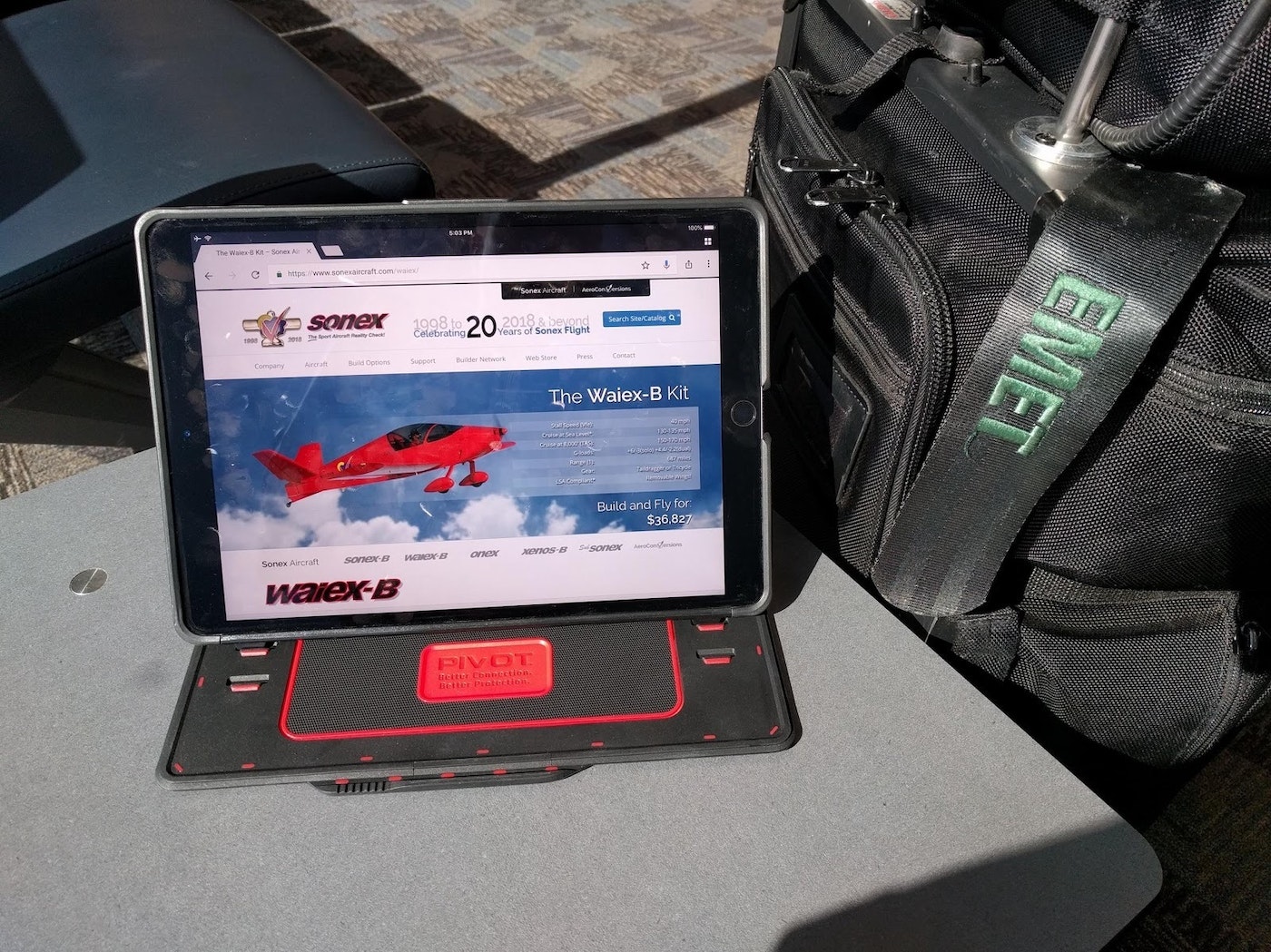 They also seem to have put a lot of care into the little things in their design. The case is slim and lightweight, yet they managed to build extra room under the shell and special vents to improve cooling. I feel like this case has the best chance of providing adequate ventilation in hot and sunny environments. That’s important in a Maddog in Atlanta in the summer, but it’d be critical in a 30+ year old airplane flying out of the Deid. I cannot imagine trying to operate there with any other case.

Although I give priority to function, Pivot’s care and detail of design is not lost on me. It’s made of rubberized ABS plastic that manages to feel lightweight and sturdy at the same time. Much of it is texturized for better grip. Mine has red accents that contrast nicely with the overall black case. It strikes a good balance…it’s attractive and professional without being flashy. I suspect that the color accents would look almost as good in Big Purple or Jet Blue. 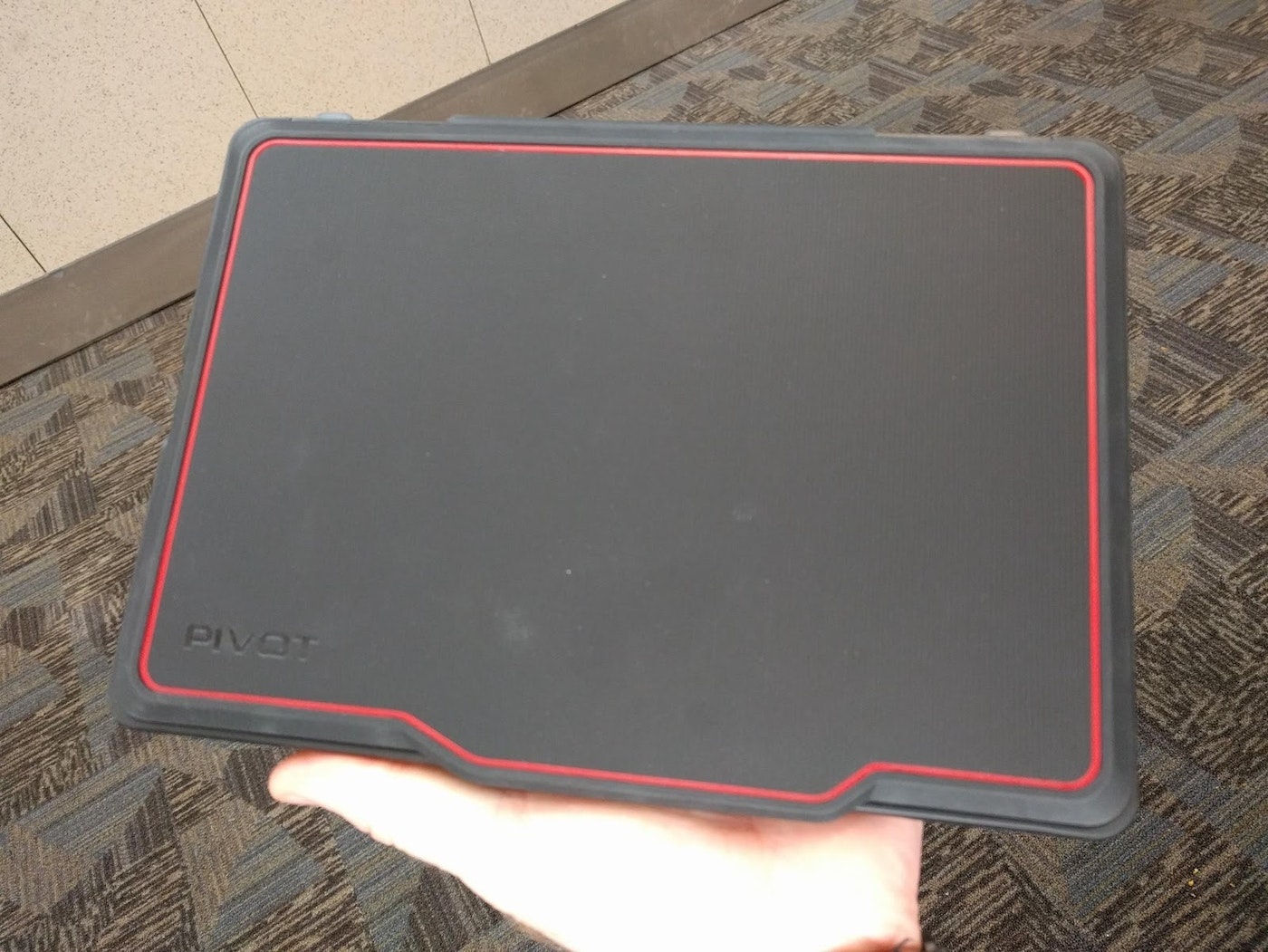 I’ve spent years flying my C-170 with an iPad strapped inconveniently to the passenger seat. I’ve been unable to find a mounting system that could put it in my field of view, without being so bulky that it’s in the way of the controls. I’m looking forward to seeing how this new EFB setup fits in a light aircraft. If you’re in the market for a mount for your GA EFB, I think Pivot deserves your consideration.

Pivot’s cases would also be a great choice for any military unit. They have all kinds of mounting options that make it practical to use in any aircraft. They even have a mount on a leg strap for pointy-nose pilots and pilot training types. Pivot’s cases are inherently designed  to operate in hot environments, and they offer cases in tan and grey designed to reduce heat absorption. 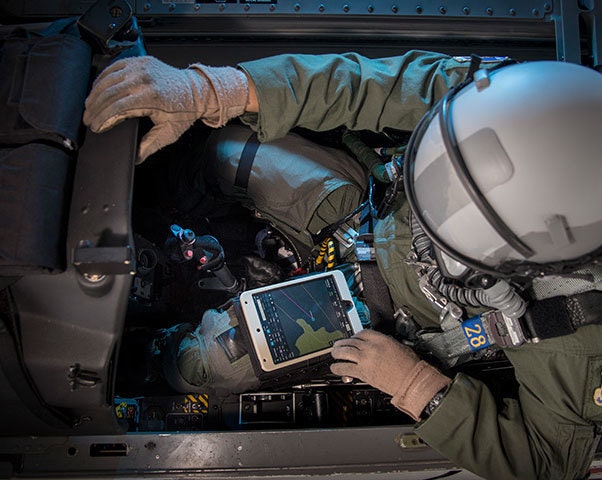 The most critical aspect for military pilots though is the potential for improved safety. Pivot’s cases are designed to improve CRM…to be effortlessly pulled off the mount and used as a briefing tool, rather than a flight deck distraction.

This mounting feature could play a key role in an emergency situation. Last-minute divert to an unfamiliar field at night while one pilot has a handful of jet? You could distractedly fumble with your EFB to try and find the approach plate you need, while sacrificing aircraft control. Or…let the other pilot bring up the approach plate, use one hand to pull the EFB off the mount, and hand it to the pilot flying so she can keep a hand on the controls and do a one-handed remove-and-replace with the copilot’s tablet so that they both have good information…right now! With some cases, this task would require untold amounts of coordination and aircraft control transfer at the worst possible time. With Pivot cases, this could be a 5-second procedure that happens without any fuss…leaving the crew free to handle the situation, run checklists, and fly the airplane. 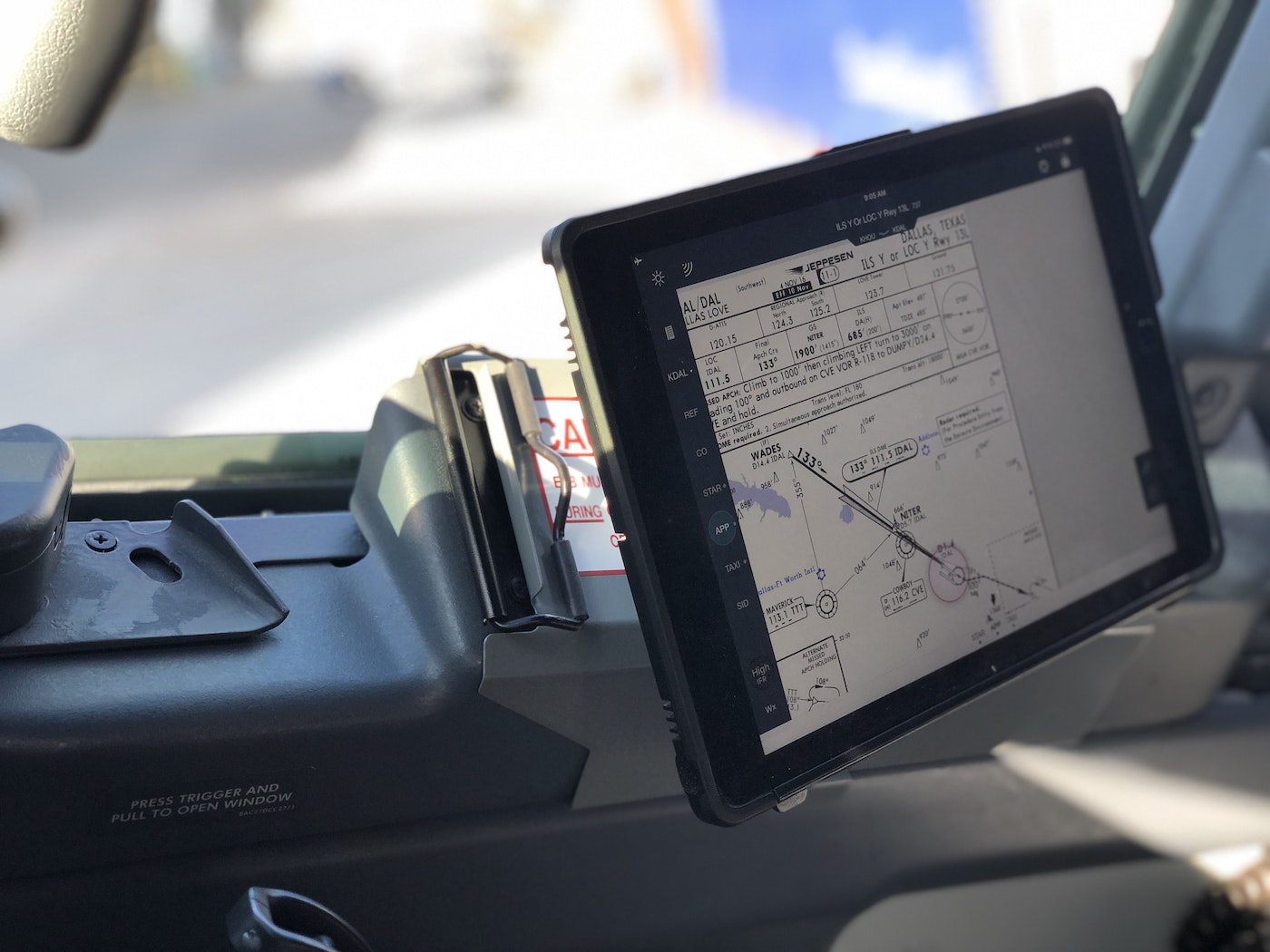 In case you can’t tell, yes, I am a little biased here. I don’t fly for the military right now, but I want those who do to have the right resources for safety and efficiency. If we’re going to spend tax dollars on EFBs, cases, and mounts, I think they should be the best product for the mission. Pivot’s cases are lightweight, sturdy, and versatile. They’re designed to be a CRM-enhancing tool instead of a flight deck distraction. They’re definitely better suited to the most demanding operating environments the military has right now. If I were a military commander, I’d have a tough time justifying a choice to buy anything else.

The same goes for commercial aviation. If you work for an operator that’s considering an EFB solution, I’d absolutely tell them to go talk to Pivot. If the 14,000+ pilots using it at my company aren’t testimonial enough for you, I’d also consider the fact that this case is used at another 75 airlines worldwide by more than 97,000 total pilots. iPad Pro + Pivot case is going to be a tough pair to beat.